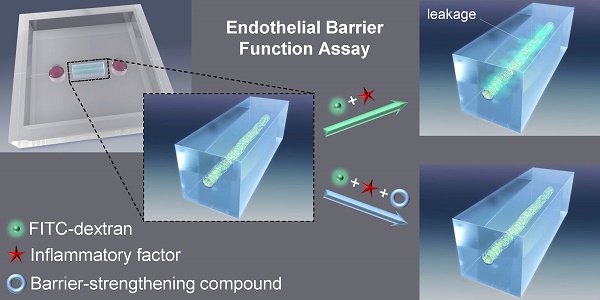 The vascular barrier is an important function of the endothelium and its dysfunction is involved in several diseases. The barrier function of the endothelial cell monolayer is governed by cell-cell, cell-extracellular matrix (cell-ECM) contacts, and inflammatory factors such as thrombin, histamine or vascular endothelial growth factor. Several in vivo and in vitro assays that measure the vascular permeability induced by these factors have been developed. However, they suffer limitations such as being challenging for assessing details of biological processes at a cellular level or lacking the architecture of a vessel, that raise the need for new methods. In vitro 3D model-based assays have thus been developed but assays for investigating compounds that protects the barrier function are lacking. Here we describe the development of an in vitro three-dimensional (3D) vascular endothelium model in which we can manipulate the endothelial barrier function and permeability to molecules, which have a molecular weight similar to human serum albumin, allowing to assess the protective effect of compounds. A microvessel was prepared by culturing human umbilical vein endothelial cells (HUVECs) within a collagen gel on a polydimethylsiloxane (PDMS) chip. Using fluorescein isothiocyanate (FITC)-conjugated dextran (70 kDa, FITC-dextran) and confocal fluorescence microscopy, we showed that the microvessel presented an effective barrier function. We were then able to induce the loss of this barrier function by treatment with the inflammatory factor thrombin. The loss of barrier function was quantified by the extravasation of FITC-dextran into collagen matrix. Furthermore, we were able to analyze the protective effect on the endothelial barrier function of the cyclic adenosine monophosphate (cAMP) analog, 8-pCPT-2'-O-Me-cAMP (also called 007). In an attempt to understand the effects of thrombin and 007 in our model, we analyzed the adherens junctions and cytoskeleton through immunostaining of the vascular endothelial cadherin and actin, respectively. Our assay method could be used to screen for compounds modulating the barrier function of endothelial cells, as well as investigating mechanistic aspects of barrier dysfunction.