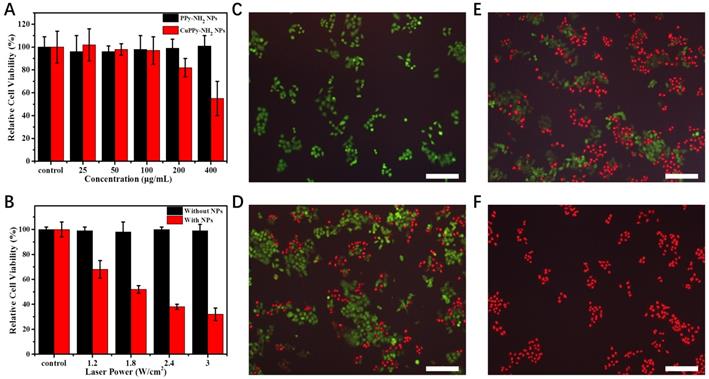 In addition, part of the description was incorrect. In "Animal experiments" (p. 213 right lines 2-10), the correct description should be “4 weeks' old balb/c nude mice (weighing ~ 18 g) were bought from Beijing Vital River Laboratory Animal Technology Co. Ltd. The mice were used under protocols approved by Jilin University Laboratory Animal Center. After one week's feed, 2×106 of KB cells dispersed in 150 μL of cell culture were injected subcutaneously into the right back leg of the mice”. In "Results and Discussion" (p. 216 right line 14), the correct description should be “As exposed under laser irradiation for 0, 3, 8, 10 min”. These corrections do not alter the major conclusions of this article. Besides, for the laboratory animal welfare principle of “3R (Reduction, Replacement, Refinement)”, we shared a blank control group with another work of our group in MRI (Figure 7G-J), which is quoted here [2].

Photothermal therapy of KB tumors in vivo. (A) Relative tumor volume growing trend. (B) Average body weight for each group. (C-F) Photographs of typical mouse bearing tumor model and tumors taken from each group in the 16th day. The mean tumor volume in each group was 89.4, 90.7, 91.4 and 92.3 mm3 at the beginning of the treatment and 992.7, 986.5, 404.7 and 0 mm3 at the end of the treatment, respectively. The scale bar for tumors represents 20 mm. 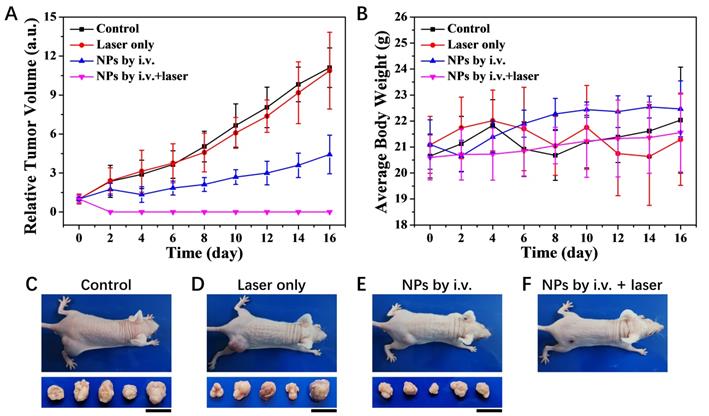 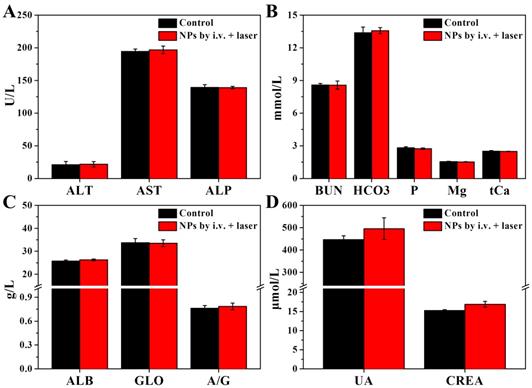 S10. H&E stained tumor slices after 16 days of treatment. (A) Control group. (B) Laser only group. (C) CuPPy-NH2 NPs only group. The tumors were removed at 16 days in all three groups. (D) CuPPy-NH2 NPs + laser group. In (D), after photothermal treatment with NIR laser, the tumor was removed immediately. The scale bar is 100 µm.

S14. H&E stained splanchnic slices after 16 days of treatment. The control group is age-matched healthy mice. The NPs by i.v. + laser group is thermo-chemotherapy group in our experiments. The scale bar is 100 µm.