Results: The results that MCF-7 cells were successfully destroyed under the near-infrared (NIR) irradiation and the intracellular WTp53 increased while the MTp53 decreased. These results indicated that p53 is the key molecule in the apoptosis signaling pathway. Photothermal therapy can stimulate the MTp53 in the cell signal conductive pathway.

Noble metal nanoparticles, peculiarly gold nanoparticles (AuNPs), keep attracting much attention due to its excellent biocompatibility and picturesque optical properties [1-5]. AuNP is an attractive nanomaterial candidate with resonant absorption and excitation of incident light to induce strong local surface plasmon resonance (LSPR) [6,7]. With the continuous development of dark-field hyperspectral imaging (DFM) and plasmon resonance scattering spectrum, the impact of plasmonic nanoparticles has been successfully applied in biosensing [6], single particle analysis [8], colorimetric biosensors [9], and single-cell monitoring [10]. On one hand, AuNPs has a strong absorption capacity and high heat conversion efficiency, which was also inspired by the AuNPs' plasma properties and excellent tolerability [11]. Although AuNP-based light therapies for cancer have been widely reported [12-14], these methods lack the ability to do cell surface photothermal therapy or track cancer marker p53. In this field, it's worth emphasizing that how flexibility to design new-style AuNP-based photothermal reagents for high sensitivity and selectivity of cancer therapy. On the other hand, taken the clinical trials consideration the clinical trials, it is expected that the photothermal emission of absorption of long-wave light in the near-infrared (NIR) region can further penetrate the tissue [15,16]. To accomplish this target, AuNPs of varying forms and sizes have been prepared for NIR illumination and attained a good therapeutic effect [17]. Regrettably, these nanoparticles cannot fixedly aggregate on the cell membrane since they can easily be endocytosed into cells. This prompted us to design an intelligent system that assembled on the surface of cancer cells after the small-sized AuNPs (The diameter of which is less than 20 nm) capture the 60 nm gold which is immobilized on the cell membrane. The system can form a gold nanobeam, whose absorbing light is in the near-infrared region, for subsequent photothermal therapy.

Human p53 is a tumor-suppressing protein to controls cell dividing cycle and apoptosis (programmed cell death) by controlling tumor progression [18]. There is a central specific DNA-binding domain in present human WTp53 (wild-type p53 protein) [19]. The DNA-binding center region of p53 protein loses binding capacity due to extensive mutation in p53 gene in various types of cancer cells [20]. Abnormal expression of MTp53 (mutant-type p53 protein) can serve as an important carcinogenesis stimulus [21]. Thus far, various methods for detecting endogenous p53 have been reported, including enzyme-linked immunosorbent assay (ELISA) [22], immunohistochemically assay [23], electrophoretic mobility shift assay [24], and ds-DNA consensus binding biosensing assay [25]. Despite the favorable detection limit and sensitivity of these methods, none of these methods linked at the relationship between photothermal therapy and p53 protein signaling pathways. Hence, it is urgently needed to design in situ analysis strategies for photothermal therapy of cell membrane surface to analyzing the changes of p53 protein in cells.

To investigate whether the gold nanoparticle bouquet can downregulate MTp53 during photothermal therapy, the gold nanoparticle bouquet (AuNP60/APBA-AuNP13/MN) was designed through dual functionalization of a single 3-aminophenyl boronic acid (APBA) assembled on the surface of gold nanoparticles (AuNP60) with amine-gold links to construct AuNP60/APBA. APBA binds to mannan-conjugated gold nanoparticles (AuNP13/MN) [26,27]. The AuNP60/APBA, which is a plasmonic AuNP, can held on the plasma membrane through the competitive reaction of cell surface SA with AuNP13/MN. Thus SA can replace AuNP13/MN and bound to AuNP60/APBA. AuNPs absorption can be transferred to near-infrared by polymerization. They can not only can be viewed under dark-field hyperspectral imaging (DFM), but also be used for the subsequent photothermal therapy. It is showed that MCF-7 cells were successfully broke under-near-infrared (NIR) irradiation. And the intracellular WTp53 increased while the MTp53 decreased (Figure 1). These results indicated that p53 is the key molecule in the apoptosis signaling pathway. Photothermal therapy can stimulate the MTp53 in the cell signal conductive pathway. This research affords a new strategy for studying intracellular p53 analysis through photothermal therapy on the cell surface and finds a potential in-situ treatment against cancer.

The AuNPs that were used for DFM images were fixed on the surface of the glass sheet. The glass sheet was sonicated in ethanol and then washed with pure water. The clean glass sheet was dried, and the AuNP solution was deposited on the surface to evaluate the DFM detection. To image cells that had absorbed AuNPs, the cell suspension (1 mL, 1×106 mL-1) was seeded in each culture dish (the bottom is glass sheet) and cultured overnight. Then, 30 μL of the AuNP-60/APBA was added to each dish and incubated for various times at 37 °C. Furthermore, the dishes were washed twice and immersed in PBS for DFM imaging. Then, 50 μL of the AuNP-wrapped mannan was added to each dish. The AuNP-scattered light was split using a grating, and the scattering spectra of the samples were recorded by CCD spectrometer.

Characterization of the gold nanoparticle bouquet

A schematic illustration of a gold nanoparticle bouquet (AuNP60/APBA-AuNP13/MN) for in situ analysis of in-tracellular WTp53 and MTp53. 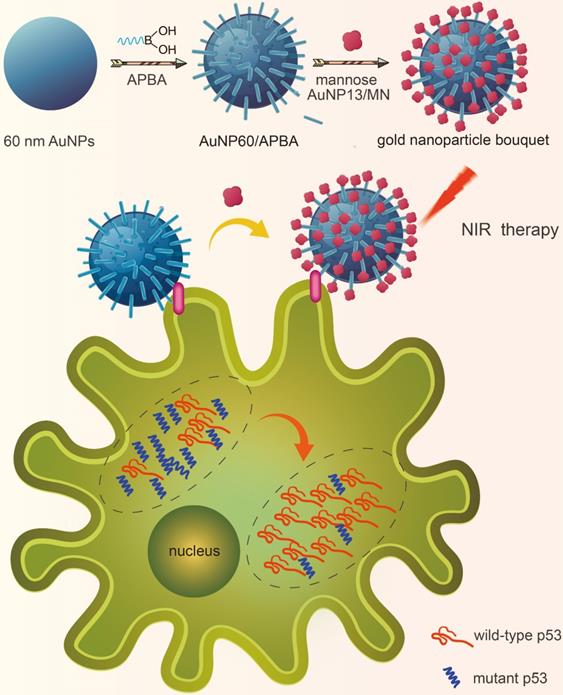 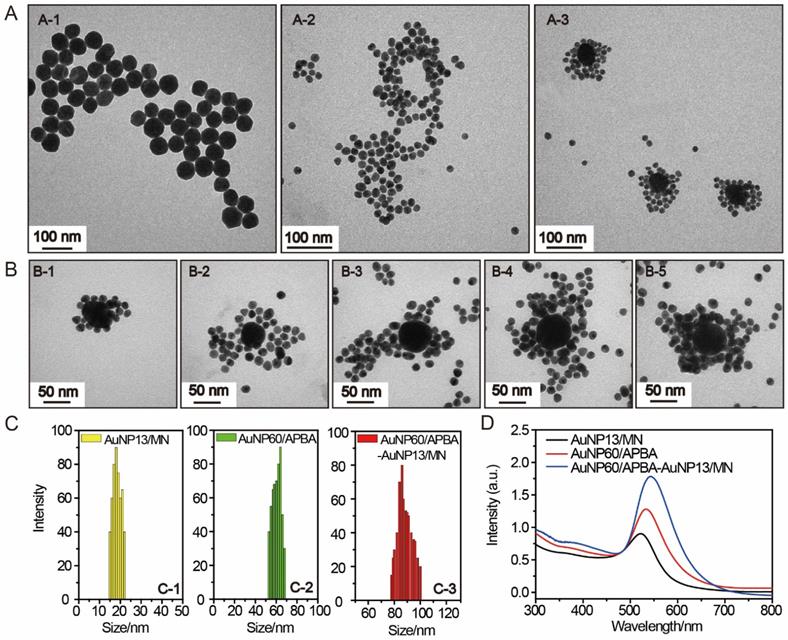 In situ Dark Imaging of the gold nanoparticle bouquet

In addition, after the intracellular DFM images, the feasibility of p53 apoptotic signalling pathway based on the AuNP60/APBA nanoparticle bouquet was applied by MCF-7 cell-free extracts. The change of p53 level in MCF-7 cells was studied by using AuNP60/APBA nanoparticle bouquet as a simulation drug through NIR irradiation. After incubated with AuNP60/APBA for 2 h, the MCF-7 cells (1 mL, 1×106 mL-1) extracts were added with different amounts of AuNP13/MN solution for 12h. A p53 pan ELISA kit (KeyGen Biotech. Co. Ltd., Nanjing, China) was used to detect the level of total p53 (WTp53 and MTp53), extraction of the above cell extracts for testing and establishment of the standard calibration curve (Supporting Information, Figure S6, Figure S7). After drug treatment, the total p53 level was increased, while the MTp53 level gradually declined (Figure 5A), which indicated through NIR irradiation of AuNP60/APBA-AuNP13/MN nanoparticle bouquet ability to stimulate the MTp53 in cell signal conductive pathway. 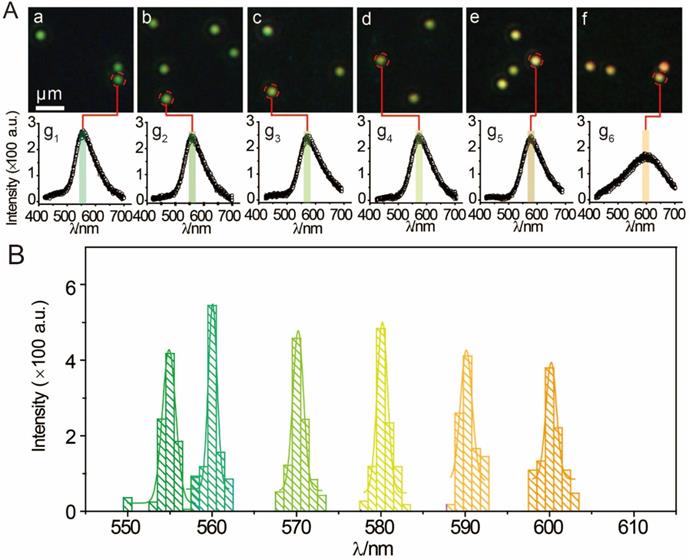 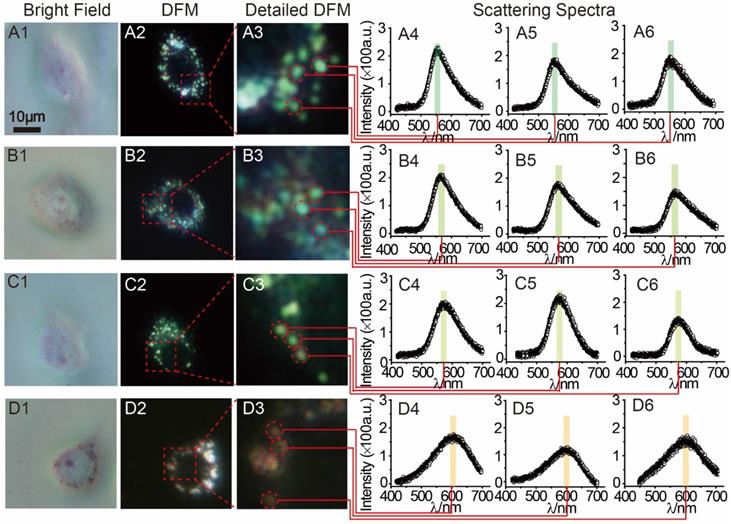 To demonstrate that photothermal therapy using AuNP60/APBA-AuNP13/MN nanoparticle bouquet could adjust MTp53 content, WTp53 and MTp53 in the MCF-7 cell extracts were collected respectively for measurement after the therapy. The result showed that the expression of WTp53 was upregulated while the expression of MTp53 was downregulated. The identification of WTp53 and MTp53 in HBE cells, a non-tumor cell line, was used as control-experiment (Figure 5B). P53 levels were normal in the HBE cells, but MTp53 levels were abnormal in MCF-7 cells. At the same time, when the AuNP60/APBA-AuNP13/MN nanoparticle bouquet was added to MCF-7 cells for photothermal treatment, the MTp53 levels have been decreased by a half and the number of WTp53 increased by one times (Figure 5B). The results indicate that photothermal therapy can stimulate the MTp53 in the cell signal conductive pathway and the cells enter normal apoptosis state.

The above results have successfully proved that the proposed binary system can efficiently bind AuNP probe on the surface of living cells to form a polymer in the presence of AuNP13/MN. MCF-7 cells were used as a model to investigate whether the aggregates could be applied to kill tumor cells under NIR photothermal therapy. After incubation with the different concentrations of AuNP60/APBA nanoparticle bouquet for 12 h, the cells were irradiated with a laser (680 nm, 0.5 W cm-2, 37 °C). The absorbances were examined to ascertain the relative cell activity. Cell viability remained at 90 % in the dark (Supporting Information, Figure S8), suggesting that AuNP60/APBA nanoparticle bouquet were biocompatible in cell experiments. However, after 20 min of NIR irradiation, morphological changes of cells (Figure S9) and the apoptotic MCF-7 cells bursted, which demonstrated that AuNP60/APBA nanoparticle bundles were capable of killing cancer cells under NIR illumination in a cell biocompatibility assay system (Figure S8). Meanwhile, consistent with the results from the MTT assay, EdU incorporation assay (Figure 5C and 5D) and TUNEL assay (Figure 5E and 5F) revealed that the proliferation of MCF-7 cells was reduced while the apoptosis was increased in light group. TEM images showed the AuNP60/APBA-AuNP13/MN nanoparticle bouquet in MCF-7 cell surface (Figure S10). Overall, these results revealed that AuNP60/APBA-AuNP13/MN nanoparticle bouquet combined with illumination showing an excellent anti-tumor effect on human MCF cells. 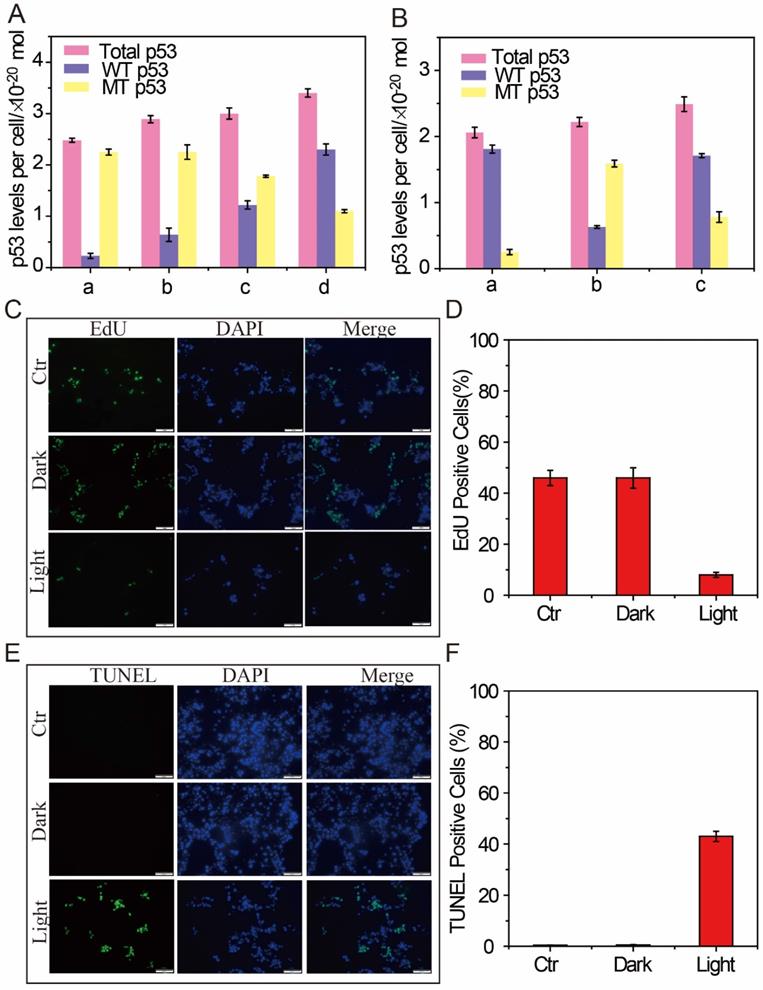 (A) Histological observation of the tumor tissues without and with NIR treatment hypodermic injection of the gold nanoparticle bouquet after 7 days. (B) Change of tumor volume with or without NIR treatment for 2 weeks. Scale bars: 200 μm.

On the basis of former cell NIR studies, we further established a binary system to monitor the effects of NIR therapeutic in living mice. Feminine pathogen free (5-6 weeks) BALB/c nude mice were used as tumor models. Under isoflurane anesthesia, MCF-7 cells in the logarithmic growth stage were injected subcutaneously into the flanks of the nude mice. Then, the AuNP60/APBA-AuNP13/MN nanoparticle bouquet solution was hypodermically injected into the tumor-bearing mice. The nanoparticle bouquet could efficiently arrival the tumor region, mice with the MCF-7 tumor were treated with a NIR laser (power of 0.5 W cm-2) irradiation for 30 min to treatment, while mice without NIR treatment were served for control. As shown in Figure 6, after 7 days of NIR treatment, the tumor status was monitored. Histological examination was carried out to observe the tumor tissues. The tumor tissue sections were clearly necrotic, while the control group showed no apparent cell destruction (Figure 6B). The results show that the proposed system NIR therapy has an obvious therapeutic effect on tumor tissue.

In this work, we designed the AuNP60/APBA-AuNP13/MN nanoparticle bouquet to research the p53 in cells signal conductive pathway by photothermal therapy. The developed plasmonic AuNP60/APBA and AuNP13/MN sample can be easily prepared and had good biocompatibility. The AuNP60/APBA-wrapped AuNP13/MN readily entered living cells to do photothermal therapy. Evidently, the color changes are caused by the conjugation of AuNP60/APBA and AuNP13/MN, the formation of AuNP60/APBA-AuNP13/MN nanoparticle bouquet was observed, the changes of the p53 level in cells were studied through NIR irradiation. Thus, results showed that the intracellular WTp53 content increases while the MTp53 content decreases. The method is applicable to detect the changes of p53 level in cells during AuNP60/APBA-AuNP13/MN nanoparticle bouquet photothermal therapy, which is helpful to clarify the role of p53 in cell biological events. Thus, this capability demonstrates the effectiveness of the method for performing intracellular p53 analysis to target cancer therapy.