Recent evidence of gadolinium deposition in the brain has raised safety concerns. Iron oxide nanoparticles are re-emerging as promising alternative MR contrast agents, because the iron core can be metabolized. However, long-term follow up studies of the brain after intravenous iron oxide administration have not been reported thus far. In this study, we investigated, if intravenously administered ferumoxytol nanoparticles are deposited in porcine brains.

Methods: In an animal care and use committee-approved prospective case-control study, ten Göttingen minipigs received either intravenous ferumoxytol injections at a dose of 5 mg Fe/kg (n=4) or remained untreated (n=6). Nine to twelve months later, pigs were sacrificed and the brains of all pigs underwent ex vivo MRI at 7T with T2 and T2*-weighted sequences. MRI scans were evaluated by measuring R2* values (R2*=1000/T2*) of the bilateral caudate nucleus, lentiform nucleus, thalamus, dentate nucleus, and choroid plexus. Pig brains were sectioned and stained with Prussian blue and evaluated for iron deposition using a semiquantitative scoring system. Data of ferumoxytol exposed and unexposed groups were compared with an unpaired t-test and a Mann-Whitney U test.

Conclusions: Our study shows that intravenous ferumoxytol doses of 5-10 mg Fe/kg do not lead to iron deposition in the brain of pigs. We suggest iron oxide nanoparticles as a promising alternative for gadolinium-enhanced MRI.

Gadolinium-based contrast agents (GBCAs) are widely used for clinical magnetic resonance imaging (MRI). However, classical GBCAs have raised safety concerns due to a risk of gadolinium deposition in the brain [1]. Iron oxide nanoparticles are re-emerging as a promising alternative to GBCAs. Ferumoxytol, a food and drug administration (FDA)-approved iron supplement, is immediately available as an MRI contrast agent through “off-label” use. The large size of ferumoxytol nanoparticles leads to limited extravasation in normal tissues, including the brain [2]. Various authors used ferumoxytol for clinical MRI of the cardiovascular system, brain pathologies and body imaging, among others [2]. While previous investigators reported absent ferumoxytol enhancement in the normal brain of patients on MRI [2], long-term follow up studies have not been performed. Our team conducts ferumoxytol-MRI of large animals, which provided a unique opportunity to obtain imaging-histopathological correlations. The purpose of our study was to evaluate, if intravenous ferumoxytol administration leads to long-term iron deposition in brain tissue.

Studies have been approved by the animal care and use committee of our institution. We prospectively investigated the brains of 10 Göttingen minipigs: Four pigs received one (n=3) or two (n=1) intravenous injection(s) of ferumoxytol at a dose of 5 mg Fe/kg and were sacrificed 9-12 months later for ex vivo brain MRI. Six pigs were not injected with ferumoxytol and served as untreated controls. Board-certified veterinarians placed an intravenous line into the ear vein and checked the venous access through a saline flush before ferumoxytol injection. The same venous access was used to anesthetize the pig. To validate that ferumoxytol nanoparticles had been successfully injected intravenously, MRI scans of the knee joint for ferumoxytol treated pigs showed negative (hypointense) contrast enhancement within the bone marrow and no contrast enhancement in the bone marrow of control pigs (Figure S1).

Our imaging-histopathological correlation suggests that ferumoxytol is not retained in brain tissue after intravenous administration at doses of 5-10 mg Fe/kg. Long-term follow up studies showed no significant differences in brain iron content between ferumoxytol exposed porcine brains and unexposed controls. This is in accordance with previous reports that described absence of iron enhancement of the normal brain within hours or days after ferumoxytol administration [2, 5].

Studies with GBCA demonstrated a correlation between cumulative GBCA dose and GBCA retention in the brain [1]. Preclinical studies have highlighted the importance of the choroid plexus in the regulation of iron metabolism in the brain [6]. Clinical studies have shown hypointense enhancement of the choroid plexus on MRI after multiple blood or iron transfusions [5, 7]. Therefore, it is likely, that iron brain deposition is dose dependent.

Several studies determined the minimum quantity of iron oxide nanoparticles that can be detected. In a study using Molday iron oxide nanoparticles (diameter: 30 nm, similar size to ferumoxytol) the minimum detectable concentration in horse serum on a 7T MRI scanner was 38 pmol/l [8]. Several clinical trials determined threshold iron concentrations that can be detected in tissues: In postmortem brain tissues from Alzheimer's disease patients, a threshold iron concentration of 50 µg Fe/g wet tissue was determined, above which iron could be detected in the brain on MR images at 4.7 Tesla [9]. In another study of human postmortem brains specimen, iron concentration as low as 30 ± 12 µg Fe/g and up to 205 ± 32 µg Fe/g wet tissue correlated significantly with R2* values on a 3T MRI scanner [10]. Studies comparing Prussian blue stains with MRI have reported an overlap of positive Prussian blue stains and T2* hypointensities on MRI scans obtained on a 7T MRI scanner for patients with Parkinson's disease [11]. In another study, hypointensities in the subthalamic nucleus on a 9.4T MRI corresponded with regions of high Prussian blue staining [12].

Ex vivo Brain MRI with R2* Quantification of Specific Brain Areas. (A) T2-weighted (TR/TE/α=4952/75/90) and (B) T2*-weighted (TR/TE/α=1366/3.5/70) image with (C) corresponding color encoded T2* map of a ferumoxytol exposed pig brain with regions of interest (blue line) in the caudate nucleus, lentiform nucleus, thalamus and dentate nucleus. (D) T2-weighted and (E) T2*-weighted image with (F) corresponding color encoded T2* map of a control pig brain. No visual difference between the two groups is demonstrated. (G) Scatterplot with bar shows corresponding R2* values with no significant differences for any of the quantified brain regions between ferumoxytol exposed and control pig brains (p>0.05). Data are means and standard errors of the mean of four ferumoxytol-exposed pigs and six controls. 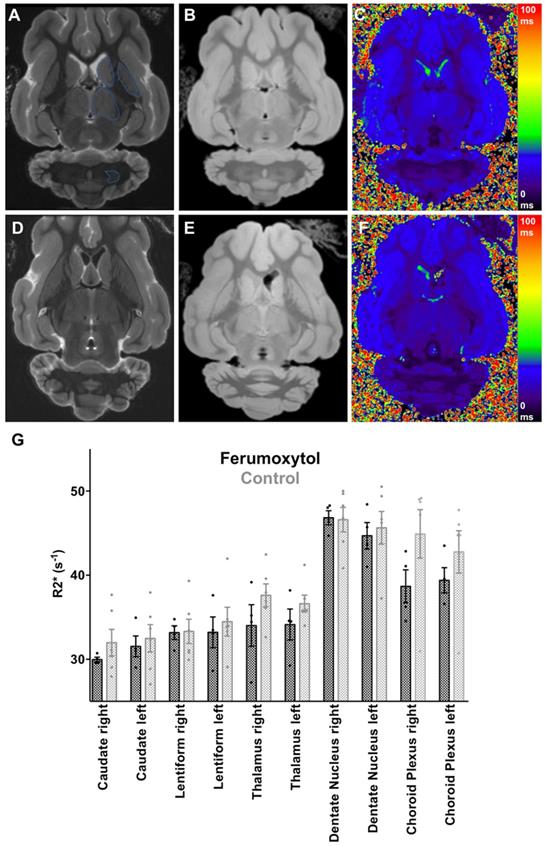 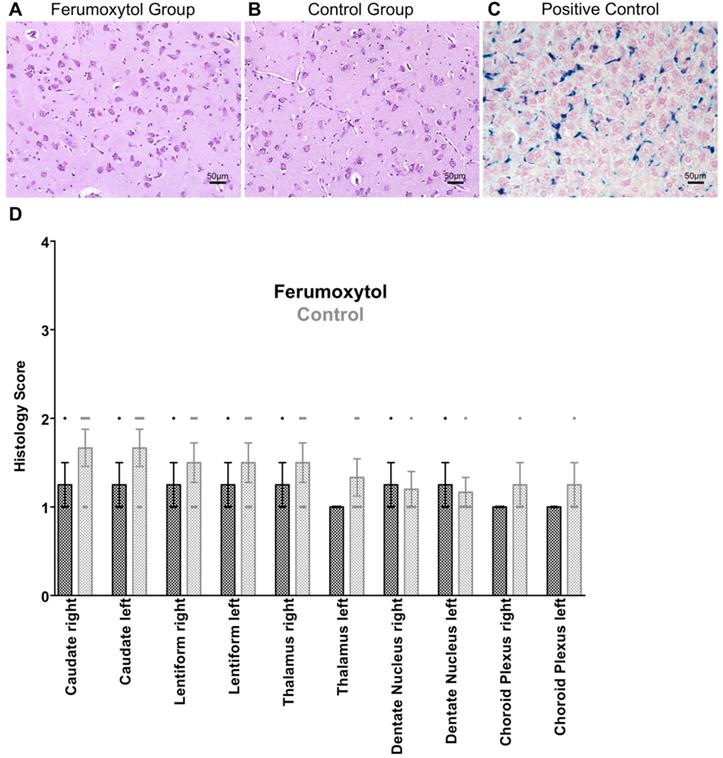 Our study used a 7T MRI scanner and iron-sensitive T2* sequences which can detect very low iron concentrations, as described in the literature. Therefore, differences in brain iron deposition between the groups in our study should have been detected with Prussian blue staining and MRI.

Previous clinical trials for MR imaging applications used doses of ferumoxytol from 1 to 8 mg Fe/kg [13-16]. Our team uses a dose of 5 mg Fe/kg for clinical applications. This dose is comparable with previous studies and is lower than FDA-approved doses for treatment of anemia (2× 510mg per patient) [2, 17-20]. In general, ferumoxytol nanoparticles are well tolerated and rare anaphylactic reactions have been reported in the adult patient population [21-24]. This is in accordance with our experience in pediatric patients who received ferumoxytol for MRI and showed few and minor side effects [25]. As recommended by the FDA, we diluted ferumoxytol 1:3 with saline and slowly infused it over 15 minutes to avoid complement activation-related pseudoallergies (CARPA) and hypotensive reactions, which are observed with rapid injections, and which can mimic true anaphylaxis [5].

Several investigators including our own group started to use ferumoxytol nanoparticles for MR imaging of vascular malformations [26, 27], cardiovascular abnormalities [28] and tumors in children [19]. The sensitivity and specificity of ferumoxytol for imaging brain pathologies in patients has been extensively studied [29-32]. Since ferumoxytol is FDA-approved for the treatment of anemia, results from this project can be directly translated to clinical applications via an off-label use. Therefore, ferumoxytol-enhanced MRI could address an important need for clinicians as a new alternative to Gd-enhanced MRI scans, which can pose a risk of long-term Gd-deposition in the brain of patients. The advantage of iron oxides compared to GBCA is that iron products can be metabolized. Of course, the capacity of the human body to metabolize iron products can be saturated with repetitive injections and the iron clearance can be impaired in case of metabolic diseases. Future studies will have to show, which iron doses and/or physiological conditions might lead to significant brain iron deposition or limited iron clearance.

The authors acknowledge support from the National Institute of Arthritis and Musculoskeletal and Skin Diseases (NIAMS) grant numbers 5R01AR054458. We thank Sid Nair for his valuable help and assistance with processing the brain specimens. We would also like to acknowledge Nathan Norton Ng who helped with the statistical analysis. Both did not receive compensation for their work.