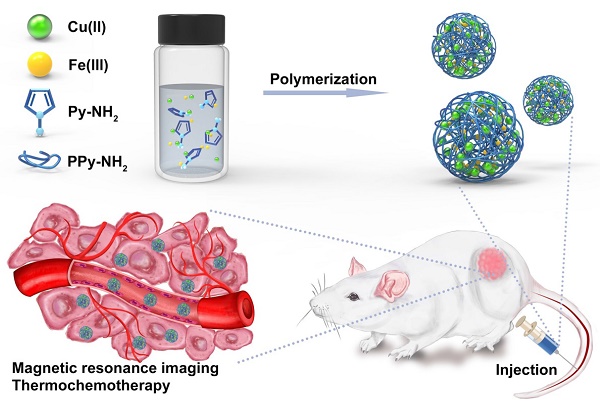 Polypyrrole (PPy) nanoparticles (NPs) possess high near-infrared absorption and good biosafety, showing the potentials as photothermal therapeutic materials. However, the single function and the weak diagnostic function limit the further combination with other functional units to achieve theranostics. In this work, polyaminopyrrole (PPy-NH2) is demonstrated as the alternative of PPy for preparing NPs. Because of the amino group, metal ions, such as Cu(II) and Fe(III) can be loaded in PPy-NH2 NPs, which extends the applications in multimodal theranostics. Systematical studies reveal that the contribution of Cu(II) in multimodal theranostics is greater than Fe(III). Cu can enhance T1 response signal for magnetic resonance imaging (MRI) and be released controllably in the organism, leading to the effect of chemotherapy. Therefore, Cu(II) and Fe(III) co-loaded PPy-NH2 NPs are defined as CuPPy-NH2 NPs. Experimental results indicate that the optimal size of CuPPy-NH2 NPs is 50.2 nm. The photothermal transduction efficiency is 76.4%. After thermochemotherapy, a complete ablation of human oral epithelial carcinoma tumors is observed. No tumor recurrence is found.

Methods: Cu(II) and Fe(III) co-loaded PPy-NH2 NPs are prepared through oxidation polymerization by mixing Py-NH2, CuCl2, and FeCl3 in water under stirring at room temperature, which are defined as CuPPy-NH2 NPs. The as-prepared CuPPy-NH2 NPs are tested with a variety of cell and animal experiments for tumor theranostics.

Conclusions: This kind of transition metal-doped polymer gives a competitive approach for designing and fabricating multimodal theranostic nanodevices, which shows the potential in tumor treatment.